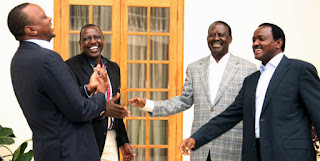 Election related conflicts along ethnic lines is the greatest threat to Africa's stability and consolidation of democratic institutions and culture.  It is with this in mind that on Wednesday, 14th December 2016, an important gathering organized by the UN and Africa Policy Institute, known as Maendeleo Policy Forum took place in Nairobi.(YouTube: Prof Peter Kagwanja CEO, Africa Policy Institute). And here is a snap shot of the conversations at the forum.
Few factors impact business growth more than the security and stability of the country in which it operates.  The 2007 post-election violence brought this painfully reality to the bank accounts of many corporates in Kenya, with the country’s GDP growth rate which stood at 7% in 2007 tanking to 1.7% the following year.
President Uhuru Kenyatta and Honorable Mr Raila Odniga at the 38th anniversary of the late founding President Mr Jomo Kenyatta told all Kenyans that they must unite and not let political differences divide them.  This was clear and unequivocal message by the two leaders.
The recent Leadership Summit on Competitiveness, Nationhood and Peaceful Elections convened by the Kenya Private Sector Alliance (KEPSA) and Parliament was therefore a welcome opportunity to consider how the private sector can support the country’s preparation for next year’s general elections. The meeting included members of both houses of parliament, political parties, government, civil society, religious leaders, development partners, private sector and independent commissions.
At this event President Uhuru Kenyatta assured all Kenyans of peaceful and credible elections.
My take:
http://news.trust.org/item/20161215104715-i1nj3/