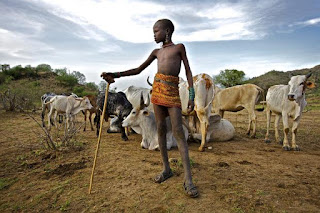 At this time of the year, people living in rural parts of Turkana County are among the hardest hit by the on-going drought in Kenya. The United Nations and the Government of Kenya approximates that 2.7 million Kenyans are facing acute food shortage and the Government has declared the drought a national disaster.
Things are looking up for Turkana County nevertheless. Not least in the reasons for new optimism is the fact that in 2012, the Government of Kenya announced that substantial oil deposits had been discovered in parts of Turkana County. Though it will be a while before the petrodollars begin to reflect in the economy, indicators such as an increase in services and jobs, expansion in activities in the hospitality industry, and increase in the frequency of flights to the county’s main town of Lodwar suggest a bright future.
My take: 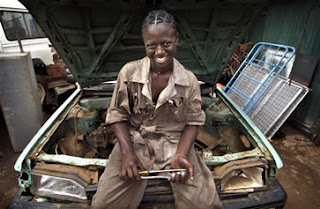 It is estimated that 3000 Kenyans are born every day, a million a year. With a median age of 18 years, Kenya is witnessing a massive youth bulge, which could either be a demographic dividend, or a disaster.  Consider this. In 1956, Kenya’s population stood at about 7 million, twice that of Norway. Today, Norway has a population of 5.2 million while that of Kenya stands at about 45 million. It is projected that by 2030, the population of Norway will be 6 million while Kenya’s population will reach 65 million, and 85 million by 2050.  Africa’s youth bulge, and Kenya’s in particular, should largely be the basis for optimism offering great opportunity for socio-economic take-off. Six of the countries with the highest economic growth rates are in Africa.  Yet, for most countries, Kenya included, economic growth lacks the desired social transformation. Despite Kenya’s impressive economic growth, four out of ten people live in extreme poverty; and the poorest 10 per cent of the population r…
Read more
Visit profile