Reuters: Breaking the silence on Gender Based Violence 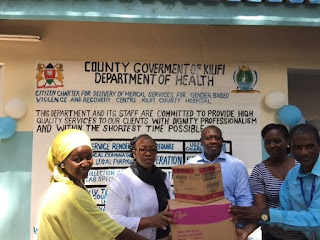 The Ministry of Public Service, Youth and Gender Affairs in partnership with the United Nations Population Fund (UNFPA) is establishing and strengthening sexual and gender based violence (SGBV) recovery centres in the country.
One such center was launched at the Kilifi County Hospital on 01 July 2016 in collaboration with the Kilifi County Government.
It must rank as among the most confounding realities that SGBV, though acknowledged globally as one of the most pervasive violations of human rights in the world, is also one of the least prosecuted crimes.
It is a crime that cuts across all races, income-levels and religions and it continues to be largely visited upon one half of humanity.
When four in every ten women in Kenya have suffered one form of violence or another from a close partner, it must be clear that the silence on violence against women and children must end now.  It is the time to stop seeing SGBV as an issue for gender activists, but as a prerequisite for sustainable development.
My opinion piece with the Minister of Gender, Youth and Public Affairs, Mrs Sicily Kariuki:
http://news.trust.org/item/20160701123030-ged25/